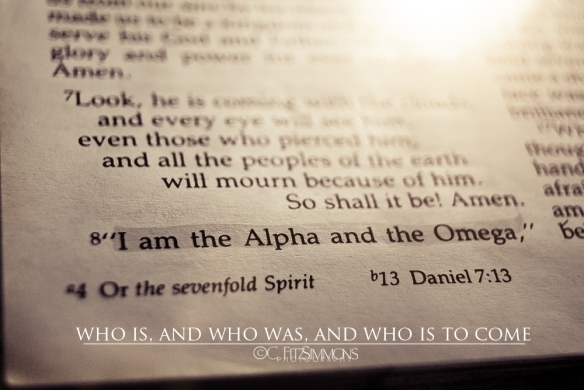 One, Not Among Many by Raymond A. Foss

A singular, actually the one
God, creator, maker of heaven, of earth
One, not one among many
competing idols, focuses, priorities
One true God, jealous, awesome
whose story, whose power, whose love
must be known, shared
out into the world
for the kingdom will not wait
his time is coming
and none should remain
in the dark

As it so often happens, what I planned to post today ended up in the delete pile; another idea came along and though I gamely went with the original idea, my heart just wasn’t in it.  There will be opportunity for it later on in the year.  I am well satisfied with today’s offering.

A word of warning…

All work on this blog is mine. I am protective of my work and it is all copyrighted. I do not want you "pinning" my work to Pintrest and I do not want you to re-blog my posts without prior consent from me. No work is to be reproduced without prior permission. If I find that you have infringed on my copyright protection, I will pursue my rights to the full extent of the law. Thank you.

All images on this blog are copyrighted

Where did I leave that?

When did it happen?

Other things to explore